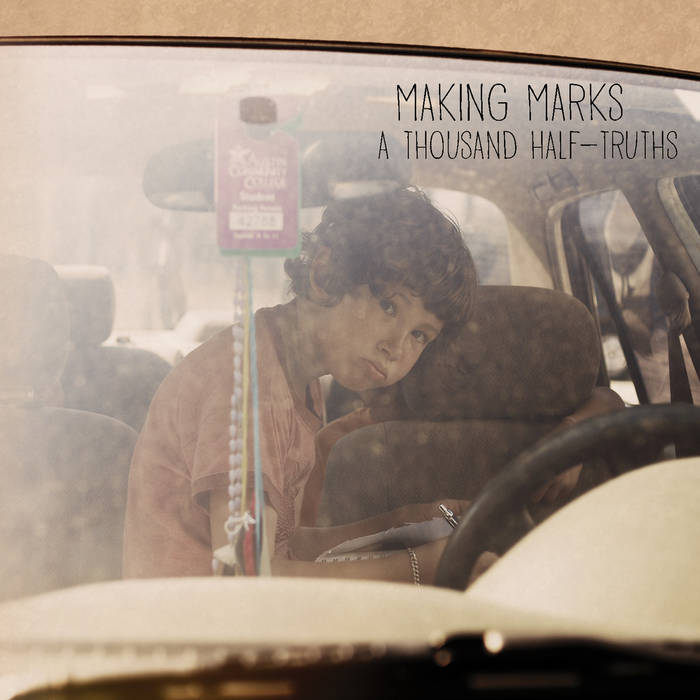 Making Marksʼ debut album A Thousand Half-Truths is a collection of heartwarming pop songs, touched with Scandinavian cool. Blending sweet male and female vocals with a lush soundscape filled with jangling guitars, buoyant drumming and textured synth lines, the Norwegian quartet have a real knack for melody and a keen ear for rich instrumentation.
Making Marks formed in Oslo in 2012 and are made up of Ola Innset on guitar and vocals, Nina Bø on vocals and keyboards, Marie Sneve on bass and Jørgen Nordby on drums. Theyʼve gigged with the likes of Bonnie ʻPrinceʼ Billy, Asobi Seksu, Allo Darlinʼ and Marit Larsen, and have toured extensively around Europe and the USA, including appearances at SXSW.
They recorded a number of tracks for the album at Soup Studios in London, with Simon Trought and Giles Barrett. It was their influence that saw Paul Rains from Allo Darlin' playing lap steel on the song “Barcodes” and this led to Making Marks supporting Allo Darlinʼ in Europe. The rest of the album is recorded in Oslo with respected indie producer Sjur Lyseid, who has worked with the band in various guises over the years.
A Thousand Half-Truths as an album is one of tensions – both resolved and unresolved. Making Marks initially planned to go down a folk/country musical path, however they soon realised that indie came more naturally to them. Yet, the tension between the country and the pop still remained, with folky melodies echoing the extended harmonies of The Carpenters, whilst their propensity for banjos, ukuleles and harmonicas faded away to leave the band sounding more integral and functional. This left them with a set of quietly confident, melancholy country songs as played by an bubbly indiepop band.
There is also tension between the lyrics and soundscape as well as between the warm, dreamy, more life-affirming songs such as "Lemon Sheets”,“Flying High Forever" and "Forgive and Forget"; and the political, critical and often pessimistic approach of "Like Spinning", "A Thousand Half-Truths", Barcodes" and "Ticket Machine".
If you do the sums, A Thousand Half-Truths equals five-hundred full truths. Yet songs are just songs – they can tell you something about life but just a glimpse at a time, revealing only half-truths but in the end perhaps thatʼs all we need.

“There’s a trace of Saint Etienne’s suburban romance to be heard in the superior pop of Making Marks, a Norwegian four-piece whose debut album puts a winning finish of wit and longing on the belts-and-braces indiepop undercoat.”
Uncut [7/10]

“It’s an effective blend, especially with the sad but beautiful vocals of singers Ola Innset and Nina Bø as well as the country twang of Innset’s picking style of electric guitar playing.”
Neon Filler [8/10]

“The album’s opening moments are its most touching, starting with ‘Bruises’ and ‘Barcodes’. ‘Bruises’ feels like a Buddy Holly song; it’s rocky, yet subdued enough to sound a little bit dated, and sombre.”
The 405

“The consistently excellent male/female vocals on show make A Thousand Half-Truths less a smack in the face than a warming, gentle arm around the shoulder. Perfect for these cold winter nights.”
Shout4Music [7/10]

“a strong contender for indie-pop album of the year”
Inforty

Bandcamp Daily  your guide to the world of Bandcamp